An iconic Australian property brand celebrates its 110th birthday in June this year, with the progeny of the company’s founder still at the helm.

The company’s namesake once sold pigs, insurance and rural real estate in a railway siding that has been restored as a museum telling the Ray White story.

The fourth generation continues to influence the brand: Sam White is the group’s deputy chairman, Ben and Dan White are directors, and Matt White is the general manager of operations in Victoria and Tasmania.

The group expanded throughout Queensland initially and today has a strong presence in each state as well as New Zealand and Indonesia. Offices have opened in recent years in India, Lebanon, Hong Kong and Malaysia.

The Ray White network lists 8,000 properties on average per month and sells over $24billion in property annually. 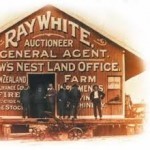