If you’ve ever wished you could just disappear, a camouflage home may be the answer. Noticeably unnoticeable, the sometimes-quirky, sometimes-glorious homes run the architectural gamut from sprawling modern estates to funky little mud huts built by hand. So, what’s the one thing they all have in common? Design that emphasizes disguise.

Consider the Casa do Penedo, or House of Stone. Fashioned from a space created by four monolithic stones, the house blends into the landscape in a way that is as fanciful as it is comical. The house was built in 1974 as a getaway for the Portuguese family that owns it in a location that was remote and private. But now its owner reports having to vacation elsewhere to escape the droves of curious onlookers who visit it each year.

When the homeowner is there, the boulder-abode provides more than its rough edges and hard surfaces might suggest. Inside, there’s a fireplace for chilly nights and mornings. The furniture, much of it made from wood and stone, is rustic and comfortable. Stairs and a landing, created from logs, are quiet underfoot and everywhere, when the sun sets, there is candlelight since there’s no electricity. Outdoors, a swimming pool, carved from the rock, provides a way to enjoy warmer weather. Looks can be deceiving: this wooden home’s built mainly out of steel and plastic.
Photo: Thomas Mayer

This mini-dwelling is disguised as a pile of wood that’s been stacked for the winter. In actuality, the building is a pre-fab structure made of steel and plastic. The log-like appearance was achieved by applying a wood veneer. When its windows are popped open, light pours in, making it perfect for a recording and practice studio for musician Hans Liberg. 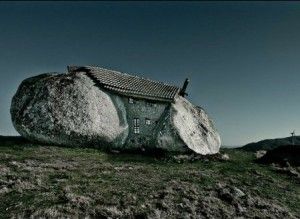 What looks like left-over boulders from the Stone Age is actually a house. Casa do Penedo or the ‘House of Stone’, was built until 1974 with four different boulders. The Portuguese getaway has no electricity so the homeowners use candlelight to see when indoors. That said, the house the boasts a cozy fireplace, a swimming pool carved into stone and logs for stairs. 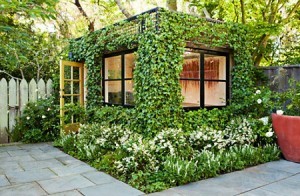 This modern cube, which stands behind a San Francisco row house, is actually an art studio. The verdant plant life that grows on its walls was introduced to make the boxy building blend into the property’s adjacent parkland. Where the cube is now, there used to be a humble storage shed. Scott Green Landscape Architects redesigned the structure. It now serves as both a garden sculpture and a shelter. 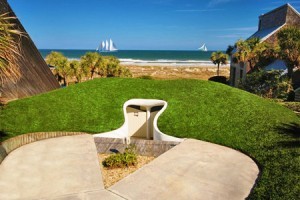 Carved into the dunes of Atlantic Beach, Florida these two psychedelic apartments are pure 1970s. Native landscaping on the exterior ensures comfortable 70-degree temperatures indoors. Created by architect William Morgan, they were constructed using technology that was devised to create gunite swimming pools. The two-story suites include beach-level terraces, lower level living spaces and upper level bed- and bathrooms accessible via a common stairway. The home is currently on the market for $1 million. Industrial designer Russell Wright designed this retreat, called Dragon Rock, in the 1960s. Nestled into a rocky hillside among 75 acres of trees and woodland gardens, the house and studio overlook a quarry pond. The home’s “camouflage features” include a vertical tree trunk supports in the dining area, jutting rock-face in the great room and bathroom, a living green roof and a naturalistic terrace overlooking the quarry lake.